The Basics In Malaysian Employment Act 1955 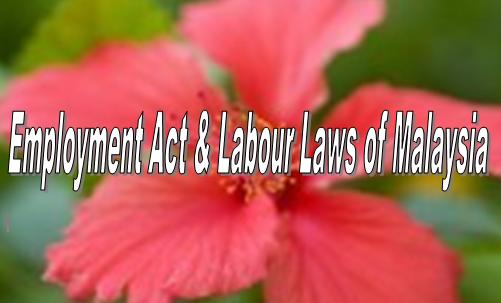 As an employee, one must know his or her rights in accordance to the Malaysian Employment Act 1955. Educate yourself today with the basics of this act and protect your rights. The following is a summary of some salient points from the employment act:

• The act applies to Peninsular Malaysia and Labuan only. As for the East Malaysian states of Sabah and Sarawak, they are governed by their respective Labour Ordinances.

- 4 weeks’ notice if the employee has been so employed for less than 2 years on the date on which the notice is given;

- 6 weeks’ notice if he has been so employed for two years or more but less than five years on such date;

- 8 weeks’ notice if he has been so employed for five years or more on such date.

• The notice period stipulated above is a minimum requirement by law, which can be extended longer in the actual employment contract, and is crucial for short notice compensation serving, with regard to Voluntary Separation, Retrenchment, Early Termination, etc.

• The employer has the right to dismiss, downgrade or suspend up to 2 weeks after due inquiry with the employee, on the basis of misconduct or inconsistency in fulfilling the service.

• An employee may terminate his or her contract of employment without notice when threatened by danger, violence or disease.

• A contract of employment is deemed to be broken when the employer fails to pay wages / salary later than the 7th day of the wage period.

• An employment contract is considered broken by the employee when he or she is absent from work for more than 2 consecutive days without prior permission or leave, unless he or she has valid reasons or has made attempts to inform his employer at the earliest opportunity during the absence period.

• All female employees shall be entitled to maternity leave for a period of not less than 60 consecutive days with regards to each confinement.

• Employees who are required to work during his or her rest day shall be double paid.

• Employees who are required to work overtime on a paid holiday shall be triple paid.

The above are just some of the important clauses in the Malaysian employment act. It is important that employees are aware of the clauses within an employment act in order to protect their rights as an employee and to keep from breaking the law and getting themselves terminated.

Day in the Life: Robotics Engineer

A Guide To Postgraduate Education

Tips for Living a Happy Life